So many figs! I made a fig pie, which was pretty good, and we actually tried our hand at canning fig jam (see photos below). The result was yummy, though quite the effort and a bit sweet (so much sugar!), so I wanted to try something different, even if it meant filling my freezer instead of my pantry. I also have some apples to use up, and wondered if they might go together well. So I googled "fig apple sauce" and found several recipes for compotes. Here's my adaptation of what I found - and it was delicious! Not too sweet, and the mix of fruits is nice. I bet this (uncooked) would also make a great pie filling. Hm..... :) 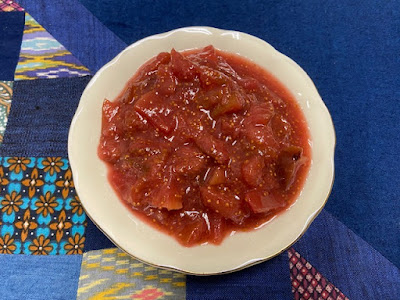 Chop figs and apples in relatively small pieces. Mix together in a large saucepan with lemon, brown sugar, and cinnamon. Let sit for an hour or two (optional). Bring to a boil and cook for 20 minutes, stirring frequently. Turn off heat, cover, and let sit to cool. Serve on vegan ice cream, or in yogurt. or on pancakes, or just eat directly! 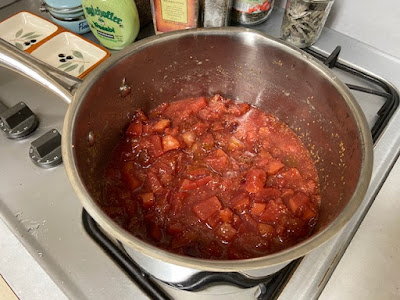 I'm not sure that I'll do this again, so decided not to make a separate post for it - but it's as story (with photos) worth sharing. We used Sure-Gel (which Don's wife Jan gave me) and followed the instructions in the package. The jars sealed, but it is pretty sweet -- the recipe called for like 7 cups sugar for 3 lbs figs! Turns out sugar is a preservative, and it makes it safer. It also helps it set. Still, the jam was pretty liquidy the next morning. It set up a bit more over the next 24 hours, but didn't set up as thick as I hoped. Also, the fruit rose to the top. I read that you can cook it a bit more to help it set, and chop the figs up smaller to keep the fruit from rising to the top.
Still, it's great spooned into my homemade yogurt or spooned onto toast. We'll enjoy what we have, and it is kinda cool storing them in the pantry instead of filling the freezer. But I think I'll return to "freezer" jam/compote/sauce for the future -- and just give away jars frequently so they don't fill my freezer. I usually do that, but it's been a little harder to give away in COVID times, as we're not socializing as much. This time next year hopefully things will be different. 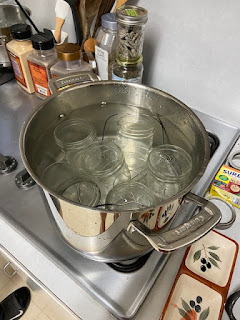 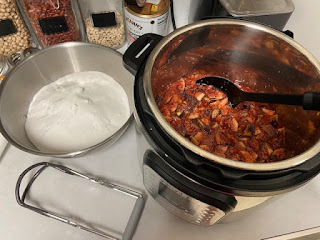 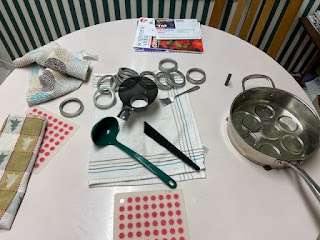 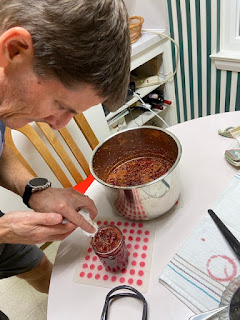 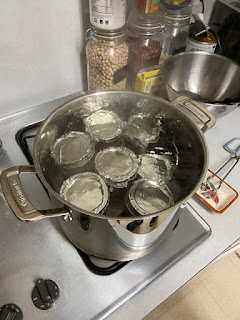 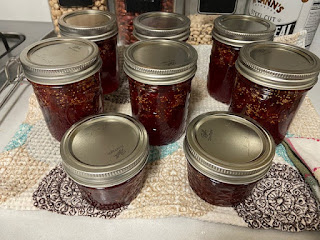 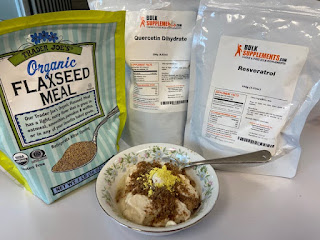 Some supplements we take to support healthy aging and longevity. (See also COVID Digression .) Lifestyle factors important to longevity include healthy diet, exercise , good  sleep , not smoking, not drinking in excess, and staying on top of health issues (like high cholesterol or blood pressure). What do we do? We're  vegan for health reasons , though also glad that it helps animals and the planet. Plant-based diets confer some of the  longevity benefits of calorie restriction , plus we practice intermittent fasting.  Exercise  gets at least an hour/day (walking, cardio, strength). Sleep gets 8 hours in a dark, quiet, cold room with an open window, and no food 4 hrs before bed. In addition, we take some supplements - ones that show meaningful effect sizes in studies and are (importantly) safe. I've included a few research links below; search evidence-based sources like pubmed  and nutritionfacts  for more info. Also, many thanks to my brother  Jeff , a psychobiologist who s
Read more 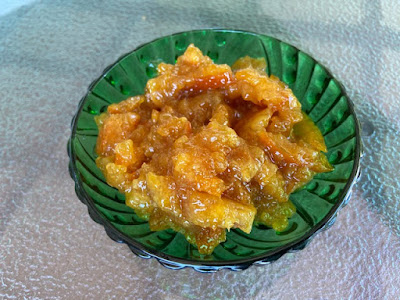 Every year we have so many oranges! They're more difficult to give away this year given COVID... we give to a few neighbors and friends, but I can't take them to the office and hand them out like in past years. An abundance of pears lead to ginger pear sauce  and too many fingers led to candied buddha's hands ... so doh, why not try my hand at marmalade? After skimming several recipes on the web, I decided to adapt this orange lemon marmalade recipe slightly to use less sugar and more oranges. It's just a little tart, and really delicious! The neighbors loved it. One request from Kurt & Pete: Cut the rinds into even smaller pieces. Ingredients 5-6 oranges rinds from another 2-3 oranges rinds from 2 lemons 1 lime (all of it if it's small, or just rinds) 8 C water 6 C sugar Instructions Wash the oranges and lemons well and cut off any bad parts. Thinly slice and throw in a big pot. Eat a few oranges after you cut off the ends because they are so delicious. Realiz
Read more 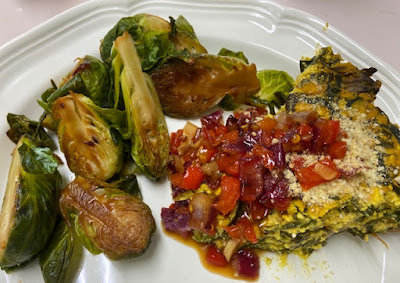 Our neighbor Elsa gave us 4 beautiful fresh leeks from her garden. I had been planning to make my chickpea tart , but then I found a mushroom leek quiche in Vegan Comfort Classics that looked worth a try! Here's my slightly adapted version. Oh, the red pepper relish is amazing on crackers or anything else you might serve a chutney with. If you have time for nothing else, make the relish! 5/1/20 Update: The second time I made this it was EVEN BETTER. Our garden was overflowing in chives, so I used 3 cups of chives, 2 zucchinis, and 1 cup mushrooms ('cause that's what I had; oh, and fresh sage from the garden). For the relish, I used red pepper and red onion. (The zucchini & pepper was from our new organic farm delivery service). OMG yum. Larry said it was stupendous! Ingredients 1 whole wheat pie crust (purchase or make) Veggie saute: 2 T canola oil 3 C leeks OR chives, sliced 1-2 C mushrooms, sliced 2 C zucchini or broccoli, chopped 1 clove garlic, minced
Read more