I made a Vegan Lasagna with Nooch Cheese a couple of weeks ago, and it was good, but didn't remind me much of classic lasagna, and Larry didn't like the nooch. So I made a mental note to try to make a classic lasagna with impossible beef and shredded vegan cheese. Two weeks later, my grad school friend Judy texts me: "Hey, there. Happy new year! Happy new administration! Just going through my old recipe binder and found (this)" -- a recipe for lasagna that I gave her back around 1990. Yay, I get to veganize my own recipe. Thank you, Judy! After a few tries, we decided the following was the ticket: biggest pan, less cheese, lots of noodles, a little extra marinara to help the noodles cook. 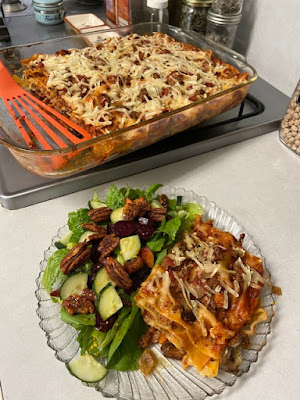 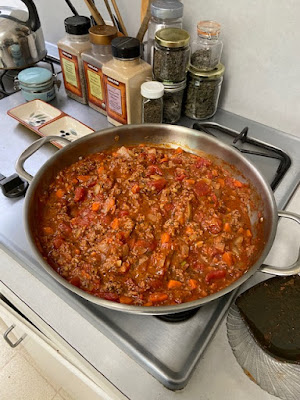 In a large pan or soup pot, saute onion, carrot, pepper flakes, and salt in oil for a few minutes. Add garlic and paprika (and mushrooms if using), and stir another minute. Add crumbled impossible burger and saute until it turns brown.

Finally, add tomatoes, oregano, and basil, and simmer for 30 minutes. Turn off and let cool. If you want to finish the lasagna tomorrow, put it in a big bowl and refrigerate overnight.

Spread the greens on the bottom of a large baking pan, and sprinkle with nutmeg and pepper. (The original recipe said to blanch or boil first, but I've found that unnecessary, and of course less work is better.)

After the last layer of sauce, sprinkle the cheese on top. Not too much cheese (and we may try without cheese sometime).

Bake the lasagna in the oven for about 45 minutes, until the cheese sauce is golden brown. 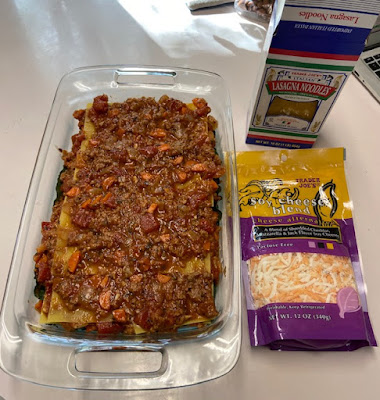 Medium pan (was too much cheese for us): 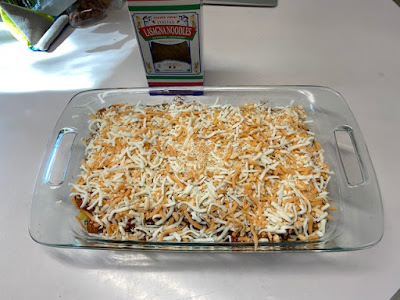 Large pan with vegan mozzarella (better, but will try even less cheese next time): 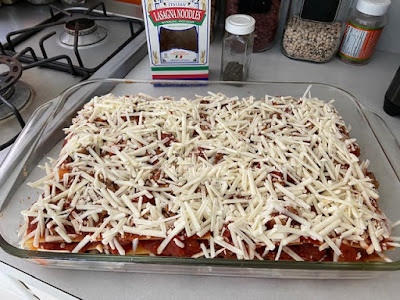 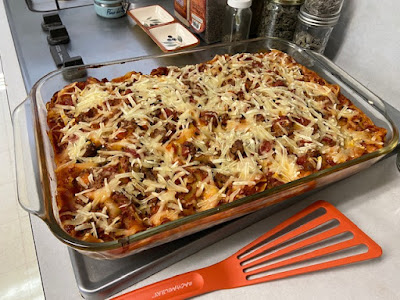 Below is the original that Judy sent me. Marti was my first roommate in grad school, and Garnet was a unix server we had our email accounts on :)

Can you believe how much cheese we used? FIVE POUNDS total. And what's with "cover the pan with foil" before you do anything? That's just weird. 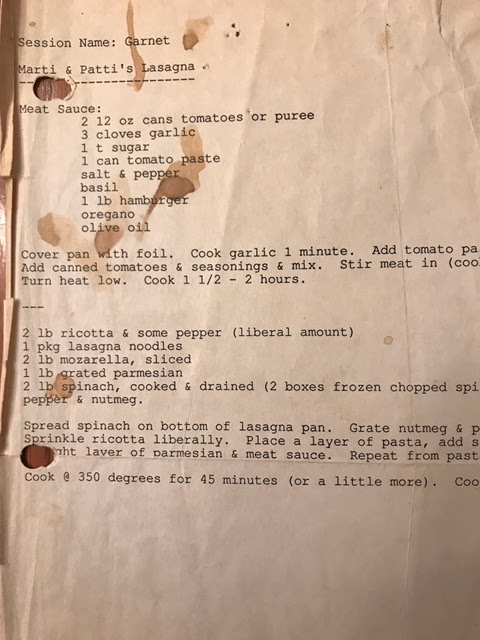 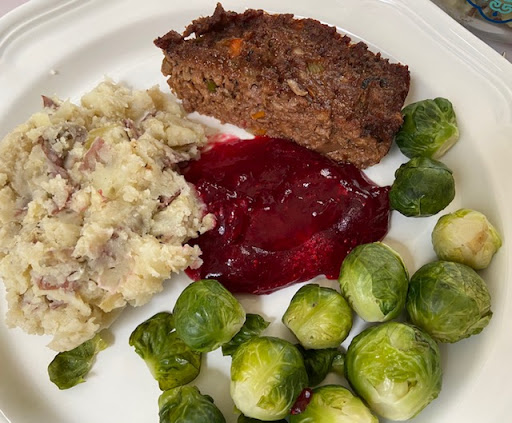 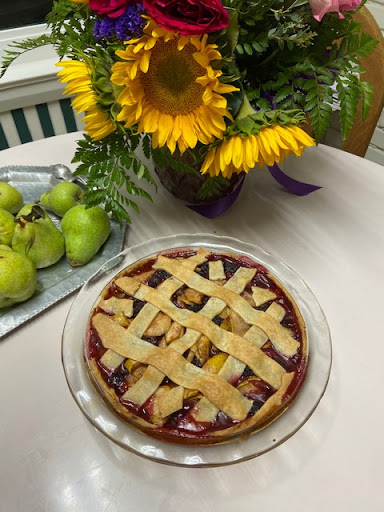 During a visit to Nebraska, Dad's friend Jack gave him a bag of about 30 fresh-picked peaches. I decided to try to make a pie, and after a little googling and experimenting, came up with an easy, yummy recipe. When our ripe pears and blackberries start entering the house in buckets, I can easily make a dozen pies. I freeze some blackberries and sliced-up pears so as to spread that out over time. Pears and strawberries are another great combination. That mix reminded me of  rhubarb pie , another great mix. And figs work, too! Ingredients 4-5 cups fruit, fresh or frozen: peaches, pears, apples, blackberries, strawberries, figs, or mix Dry: 2 T flour 2 T arrowroot or cornstarch 1/2 cup brown sugar 1 tsp cinnamon 1/2 tsp nutmeg (optional) Wet: 1 T lemon juice 1 tsp vanilla Dots of vegan butter 2 deep-dish vegan pie crusts (like  Wholly Wholesome ) or make a vegan pie crust Instructions Arrange pie crust in pie pan and chill. Cut up the fruit; no need to peel. Don't be shy, cut u
Read more